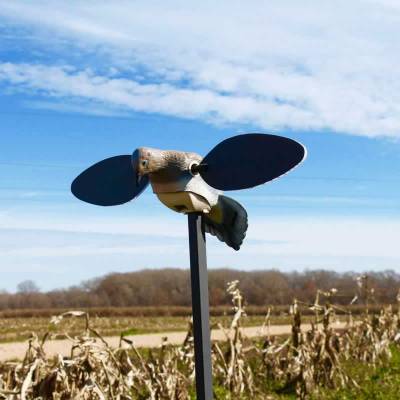 Qty:     - OR -   Add to Wish List
Add to Compare
Note: Images may only be representative of the item.
Read description and check model numbers for exact item.
Description Q & A
No questions have been posted about this product.

MOJO Outdoors is proud to introduce a new line of improved spinning wing decoys, based upon a revolutionary new patent pending concept.

Decoys engineered as they should be, following the concept used in most motorized vehicles of installing all working components into a solid, structural housing that is rigidly attached to the support pole, then placing a completely independent, flexible decoy body of the desired species around that housing.

The decoy body has an ultra realistic paint scheme that presents finer detail and holds its color. Also, with the magnetically attached wings, these decoys are more realistic, quieter, smoother, faster, and have longer battery life.